The site for Old Sarum Airfield was selected in 1917, to provide facilities for a training station for the rapidly expanding Royal Flying Corps (RFC). Like many others of this period, the airfield was provided with a cluster of general service sheds and a camp consisting largely of wooden buildings. It was opened in August 1917 and was briefly known at first as 'Ford Farm' but very soon took instead the name of the much more distinguished local fortifications.

Its first task was to act as a base for the formation of three new day bomber squadrons which would ultimately be sent across the English Channel to operate in France. The Royal Air Force (RAF) was founded on 1 April 1918, by the amalgamation of the Royal Flying Corps and Royal Naval Air Service. On the same day a new flying training unit was formed at Old Sarum to become the airfield’s principal resident unit. This was 11 Training Depot Station, whose task was the operational training of fresh aircrews.

At the end of World War I, Old Sarum was one of the few airfields which were not closed down as part of the post war run-down. In 1920, 11 Training Squadron was disbanded and preparations were made to turn the station into the permanent home of the School of Army Co-operation. The School was transferred to Old Sarum from Stonehenge in January 1921 and for many years ran mixed courses for Army and Air Force personnel. The prime task was the development of efficient air/ground communication under operational conditions, principally between Army officers, including those of the newly formed armoured forces and the pilots and observers of the RAF Army Cooperation Squadrons.

A 'Special Duty Flight' was formed here in about 1926 to work with the Experimental Gas School at Porton Down, not far away. This used a handful of aircraft including a Bristol Fighter, a Dart and a Horsley, but was transferred to Netheravon in 1928. In April 1924, 16 Squadron was reformed at Old Sarum for cooperation with Army units in Southern Command. Initially equipped with Bristol Fighters, it subsequently received the Armstrong Whitworth Atlas, in January 1931 and Audaxs in December 1933.

With these types it took part in exercises all over southern England. In June 1938 it became the first unit to equip with the Westland Lysander. The mid-1930s saw the beginning of the RAF expansion scheme, where many First World War airfield sites were inspected to see if they would be suitable for the new permanent stations which were planned due to the increased threat to Britain from Nazi Germany. Old Sarum Airfield was identified as being suitable for becoming a permanent station, and the period between 1934 and 1937 saw the development of new domestic, administrative and technical buildings. This development saw the increase in the area of the airfield occupied by station buildings from 7.5 ha (19 acres) to roughly 22 ha (54 acres). The flying field remained the same size.

Three other operational squadrons were based at the airfield for varying periods between 1935 and 1939. First of these was another army cooperation unit, 13 Squadron, whose Audaxes were based here from May 1935. Next came the Hawker Hinds of a new light bomber squadron – 107 – which stayed here until 1937. The third unit, 59 Squadron, was actually formed here in June 1937 and was a brand new army cooperation unit specially intended to carry out night reconnaissance, using Hawker Hector aircraft. Subsequently it was decided to replace these with comparatively high performance Bristol Blenheims and in May 1939 the squadron transferred to Andover to make the transition.

At the outbreak of war the appearance of RAF Old Sarum had changed little. Its line of hangars still looked out onto the grass flying field, while the old Roman road still formed the northern border of the airfield. The squadron continued to be primarily engaged in training and developing ground support techniques, including the spraying of poison gas, although this was never actually used. In February the 16 Squadron left for France via Hawkinge and its place was taken by the first two Canadian flying units to arrive in Britain – 110 and 112 Royal Canadian Air Force (RCAF) Squadrons. The final operational unit to be based here during this period was 225 Squadron (RAF), another Lysander equipped unit. This took the place of 110 RCAF Squadron on 9 June 1940 and with the growing threat of a Nazi invasion of the Britain, it was engaged in patrolling the south coast for enemy landings.

In 1939, the establishment of aircraft was increased to serve the expanding School of Army Cooperation. In February 1940 a new 'D' Flight was formed within the School for artillery spotting duties. It was out-stationed at Larkhill to be close to the Royal Artillery camp there and served as the nucleus from which all future Air Observation Post (AOP) units originated.

During the Battle of Britain, as losses mounted, the shortage of fighter pilots became so desperate that a number of army cooperation trainees were selected at Old Sarum and immediately sent to Hurricane and Spitfire training units. During the massive campaign of enemy attacks on RAF airfields in the summer and autumn of 1940, Old Sarum escaped lightly but during the night of 11/12 May 1941 one hangar was burnt out in an air raid and two aircraft were destroyed.

During the first two years of war, it became clear that higher performance aircraft were needed and so a small number of Hurricanes and Harvards joined the unit in early 1941 and they were soon followed by a flight of Tomahawks. Because of the limitations of the landing ground at Old Sarum, a larger satellite was prepared at Oatlands Hill, some 5 mi (8.0 km) away to the north-west. Oatlands Hill was equipped with only basic flying facilities and most of the maintenance work had still to be undertaken at Old Sarum but henceforth all higher performance aircraft would carry out their training programmes at Oatlands Hill. 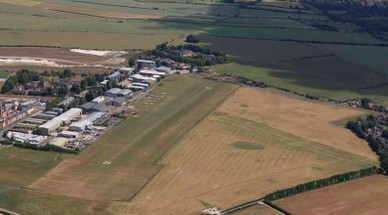 In August 1941, the first full AOP squadron was formed. This was 651 Squadron and it was equipped with Taylorcrafts, flown by specially trained army pilots. They were frequently detached to Larkhill to train with the gunners there and, in the following spring the squadron joined Army manoeuvres, thus establishing the practice of sending small detachments of aircraft to improvised advanced landing grounds ‘in the field’.

The advances in size and performance of aircraft types from Lysander to the Tomahawk prompted a reorganisation and the Training Wing was redesignated 41 Operational Training Unit. The development and teaching of methods of artillery reconnaissance were undertaken here from 1942. However, these activities required a permanent runway instead of a flying field, and so 41 OTU was transferred out in 1942. It was replaced by a new Fleet Air Arm Squadron, developing tactical reconnaissance. In 1942 Old Sarum became the principal base for the training of AOP with three new squadrons and 43 OTU moved from Larkhill to Old Sarum. While it was engaged in training new pilots, the facilities at Old Sarum continued to be used for the formation of new Auster squadrons.

655 Squadron formed in December 1942 for Southern Command, and took part in the huge ‘Spartan’ exercise in East Anglia in July 1943 which tested the efficiency of Army co-operation squadrons under mobile conditions, and was effectively a rehearsal for the invasion and liberation of North-West Europe. This led to the formation of Tactical Air Forces (TAF), which were created as replacements for RAF Army Cooperation Command.

1944 marked the end of a period of major expansion in the AOP squadrons and the spare hangar space at Old Sarum Airfield was used by 3505 Servicing Unit, which maintained numerous aircraft operating in small and scattered detachments to provide practice facilities for Anti-Aircraft and Searchlight sites. Plans for the D-Day landings were well advanced by early 1944 and included the requisition of all of the facilities at Old Sarum to form part of the 2nd TAF Concentration Area. This was, in effect, the hinterland and supply location of the many ports and embarkation points of the ships and landing craft of the invasion forces. All flying training was terminated and 43 OTU left the station entirely.

Thousands of ground personnel and virtually all RAF motor transport vehicles destined for Normandy passed through Old Sarum in the D-Day period making it an integral part in the organisational structure of the D-Day landings. Seven large tented camps were set up in the countryside around the airfield and a force of over a thousand fitters was established to undertake the waterproofing of the 25,000 invasion vehicles. A large part of the airfield was used to assemble the long lines of trucks and other vehicles and the station hangars were pressed into service as the principal workshops.

As D-Day arrived, there were no less than 34 aircraft at Old Sarum Airfield from three different squadrons (658, 659 and 662) waiting to be called forward. Ground support units, ranging from Sector Headquarters and Signals Wings to Servicing Parties and Repair Units continued to pass through until the flow finally ceased in November. The School of Army Cooperation had been reformed at Old Sarum in June 1943 and was subsequently retitled the RAF School of Army Cooperation. In 1944 it was reorganised as the School of Air Support. It was established with its own small fleet of aircraft. The experiences of war had highlighted the importance of inter service cooperation as never before and increasingly personnel from all three services became based at Old Sarum.

In May 1947, the School was re-designated the School of Land/Air Warfare, training Air Force, Army and Navy officers. In 1956, in recognition of its importance and longevity, RAF Old Sarum was honoured by being given the Freedom of the City of Salisbury. At about the same time, the station also became the home of the Army Air Transport Training and Development Centre.

One new aspect of post war aviation, which was of interest to all three services, was the widespread use of helicopters. Accordingly, on 1 June 1961, the RAF element of the Helicopter Development Unit (HDU) was formed at Old Sarum, with a handful of early helicopter prototypes, Sycamores and Whirlwinds, to explore their military potential.

In 1965 a new Joint Helicopter Development Unit (JHDU) was formed at Old Sarum and it immediately absorbed the former HDU, which became a section entitled 'Short Range Transport Development Unit'. In 1963 622 (Volunteer) Gliding School became based at Old Sarum and the School was amalgamated with the Amphibious Warfare School from Poole in Dorset to form the Joint Warfare Establishment, being equipped with a few Whirlwinds and Wessexes.

The final change was the amalgamation of Army Air Transport Development and the JHDU in 1968 to become the Joint Air Transport Establishment (JATE). In December 1971 Old Sarum ceased as an RAF airfield, although it served with the Army until 1979.